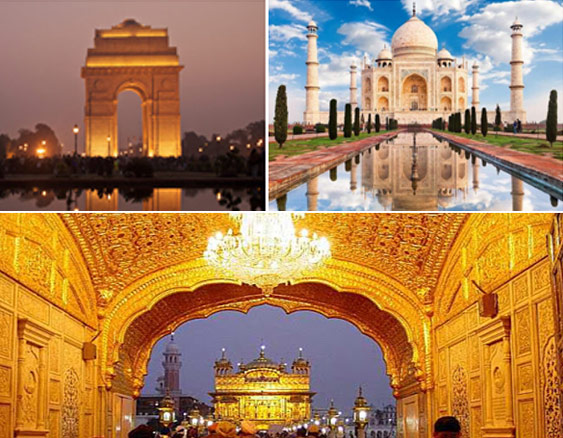 On arrival in the morning , Visit the Lotus temple and transfer to hotel for check-in .

The Lotus Temple, located in Delhi, India, is a Baháʼí House of Worship that was dedicated in December 1986. Notable for its flowerlike shape, it has become a prominent attraction in the city. Like all Baháʼí Houses of Worship, the Lotus Temple is open to all, regardless of religion or any other qualification.

Visit Jantar Mantar, which is one of the five astronomical laboratories built in India by Raja Jai Singh II of Jaipur in 1724. It was built to track the movement of the moon, sun and planets. The task was given to Raja Jai Singh by the Mughal emperor Muhammad Shah. The giant triangle here makes for an equal hour sundial. Jantar Mantar houses 13 astrological instruments, including the Samrat Yantra, the Ram Yantra, the Jayaprakash and the Mishra Yantra.

India Gate, the war memorial located astride the Rajpath, on the eastern edge of the “ceremonial axis” of New Delhi,[1] formerly called Kingsway. It stands as a memorial to 70,000 soldiers of the British Indian Army who died in between 1914–1921 in the First World War.

Following the Bangladesh Liberation war in 1972, a structure consisting of a black marble plinth with a reversed rifle, capped by a war helmet and bounded by four eternal flames, was built beneath the archway. This structure, called Amar Jawan Jyoti (Flame of the Immortal Soldier) , has since 1971 served as India’s tomb of the unknown soldier.

Parliament House – The Sansad Bhavan is the house of the Parliament of India, which contains the Lok Sabha and the Rajya Sabha

Fatehpur Sikri is a small city in northern India, just west of Agra, founded by a 16th-century Mughal emperor. Red sandstone buildings cluster at its center. Buland Darwaza gate is the entrance to Jama Masjid mosque. Nearby is the marble Tomb of Salim Chishti. Diwan-E-Khas hall has a carved central pillar. Jodha Bais Palace is a mix of Hindu and Mughal styles, next to the 5-story Panch Mahal that overlooks the site.

Visit the Monument of love and one of the Seven Wonders of the World – Taj Mahal.

The Taj Mahal is an ivory-white marble mausoleum on the south bank of the Yamuna river in the Indian city of Agra. It was commissioned in 1632 by the Mughal emperor Shah Jahan to house the tomb of his favourite wife, Mumtaz Mahal; it also houses the tomb of Shah Jahan himself.

By 4 pm start back to Delhi . Overnight Delhi .

After breakfast , proceed for Sightseeing at Delhi.

The Qutub Minar, is a minaret and “victory tower” that forms part of the Qutb complex, a UNESCO World Heritage Site in the Mehrauli area of Delhi, India. Qutb Minar was 73-metres tall before the final, fifth section was added after 1369.

Humayun’s tomb is the tomb of the Mughal Emperor Humayun in Delhi, India. The tomb was commissioned by Humayun’s first wife and chief consort, Empress Bega Begum, in 1569-70, and designed by Mirak Mirza Ghiyas and his son, Sayyid Muhammad, Persian architects chosen by her.

The Red Fort is a historic fort in the city of Delhi in India, which served as the main residence of the Mughal Emperors. Every year on the Independence day of India, the Prime Minister hoists the Indian “tricolour flag” at the main gate of the fort and delivers a nationally broadcast speech from its ramparts.

Dinner and Return to the Hotel .

After breakfast check out from hotel. Drive to Chandigarh.

Chandigarh is India’s first planned city and is known for its layout, which was ‘designed for the people’ by French architect Le Carbusier.

Zakir Hussain Rose Garden Asia’s largest Rose Garden and is spreaded over 30 acres of land having over 1600 different species or roses. These have been planted beautifully carved out lawns and flowers beds.

Breakfast at hotel. Check out from hotel.

Lunch and proceed to Amritsar Airport for onward Journey.